So here’s the skinny..

Justin Gatlin ( 9.85): At one point a very promising young sprinter, He won Gold in Athens in 2004 at 100m, Bronze at 200m. But, he tested positive for some crap messing around with Trevor Graham (Marion Jones, Tim Montgomery, Justin Gatlin, Antonio Pettigrew, CJ Hunter) <—- Just a few of the athletes who tested positive for banned substances under his coaching. But he came back in 2011 and was 2nd at US Championships. He won Gold in Doha at 60m Indoor World Championships, has run 9.87 in 2012. 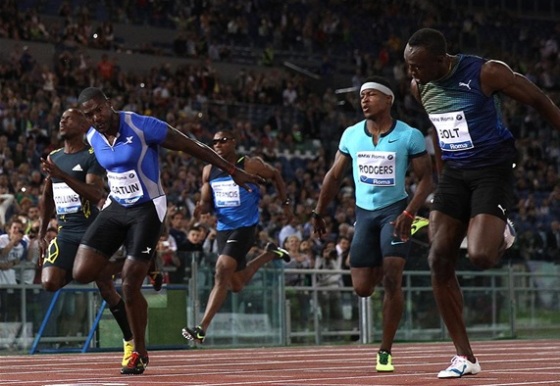 Ryan Bailey (9.88): For some weird reason he was labeled as the answer to Usain Bolt…he is not that, probably never will be. But he is tall, 6 ft 4 and he is fast. He hasn’t had a spectacular 2012 campaign running only 10.01 but, he will more than likely go sub-10 at Trials. In hopes of making the Olympic team, Bailey moved to Cali to train with Walter Dix and Richard Thompson.

Jeff Demps (10.01): World Junior Record Holder at 100m, but has not been consistent at all. A two sport athlete at University of Florida (Football/Track) he has been apart of many NCAA Championship but is injured a lot. Pulled out of the 2012 NCAA Championships because of hamstring problems, hopefully he comes to Trials in good health because he has raw speed.

Walter Dix (9.88): The Bronze medalist in Beijing, Dix is looking for a 100/200 double at this years trials. He has a PR of 19.53 in the 200, so expect something spectacular out of him later in the summer. Trains with Bailey and Richard Thompson, and he ran a 9.85 wind-aided in April.

Gatlin, Rodgers and Gay will be rockin’ that Red singlet in August.